I was the top-seed, and this meant that I would be be playing only lower rated players in the tournament. This situation adds another level of complexity, since the top-seed has to constantly work to win every game and overcome the drawish lines often played by lower-rated opponents, many of them underrated relative to their chess knowledge. On top of that, the 2015 High School edition was the strongest National Scholastic championship yet. However, these factors did not deter me since I wished to capture the prestigious title of being America’s National High School Champion for 2015. What concerned me though was the exhausting schedule, about 30 hours of Chess in 53 hours, and my ability to recover from a fatiguing Philadelphia Open tournament just prior.

On April 9, Thursday, the Blitz tournament was held. This was exciting, as Blitz usually is, although no increment on the time-control meant piece-throwing was rampant in the closing seconds. I scored 11.5/12, dropping 1/2 a point because I didn’t stop the clock in-time when my opponent  flagged, resulting in my flag also appearing thereafter. The TD said that because I didn’t claim the opponent’s flag in time, the game was a draw.

I became the National High School Blitz Champion and took the 1st place on tiebreak over the talented Christopher Wu, who also scored the same points. It was interesting to observe that the top-3 ranks went to players from New Jersey (Akshat, Chris, Arthur Shen). 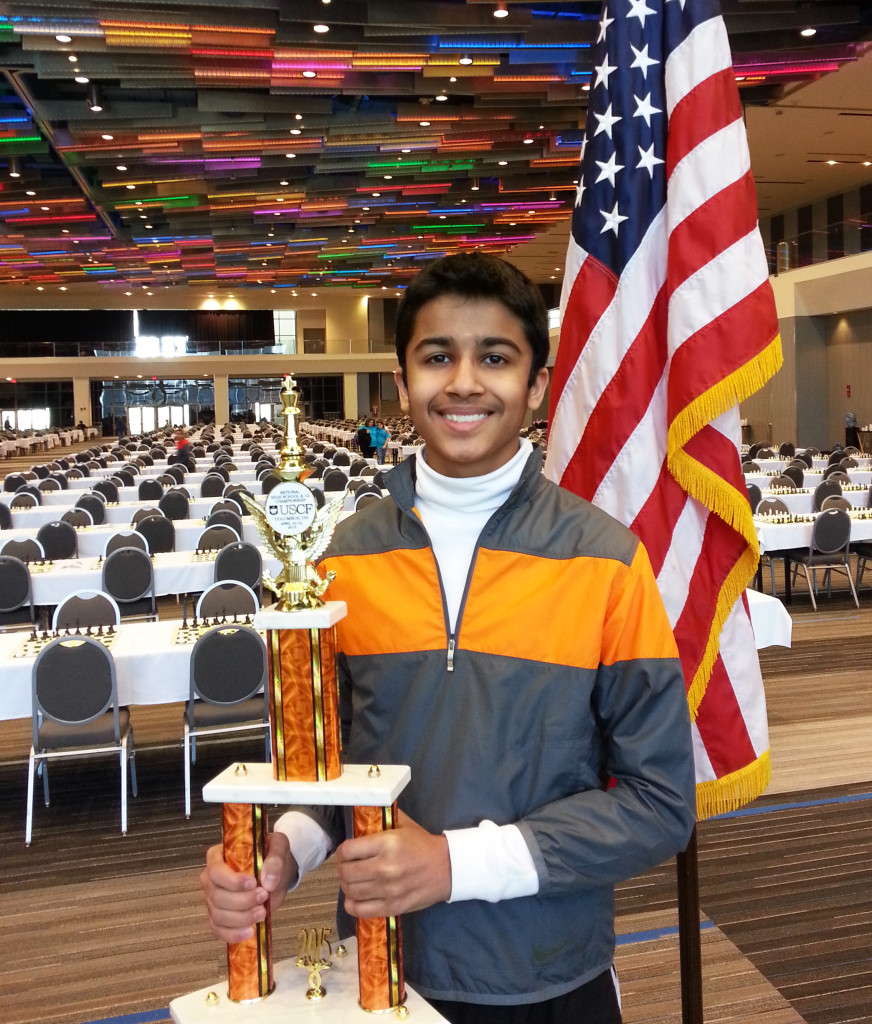 The main event kicked off the next day under shimmering colorful light panels giving the impression of Aurora Borealis or the Northern Lights, with 472 players competing in the Championship section and 1492 players in all sections. 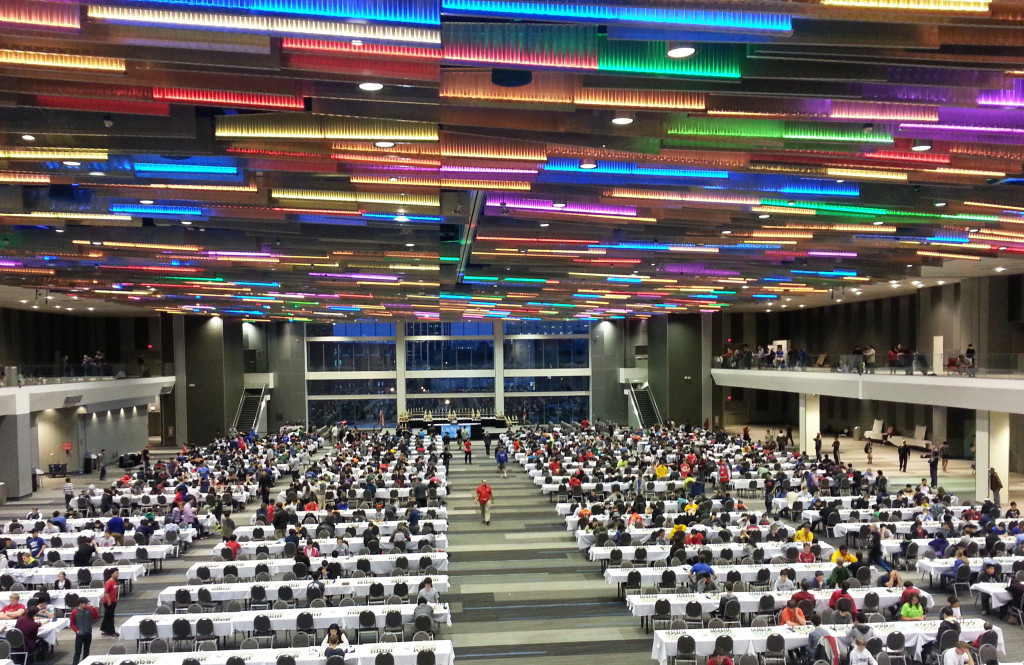 The National High School Championship at the Hyatt Regency in Columbus, Ohio

In the 1st round, I played a budding talent, 6th grader Vincent Baker from Ohio. I got a pretty good position out of the opening. But I started to make some extremely weird moves, and Vincent started to play really strong, and suddenly I found myself in a hopeless drawn rook endgame. I only had 20 seconds (with a 5 second delay), while Vincent had about 20 minutes. Somehow I managed to win after Vincent made several inaccuracies in the endgame. I really felt sorry for my young opponent for he had played great, and I didn’t deserve to win. But such is chess. 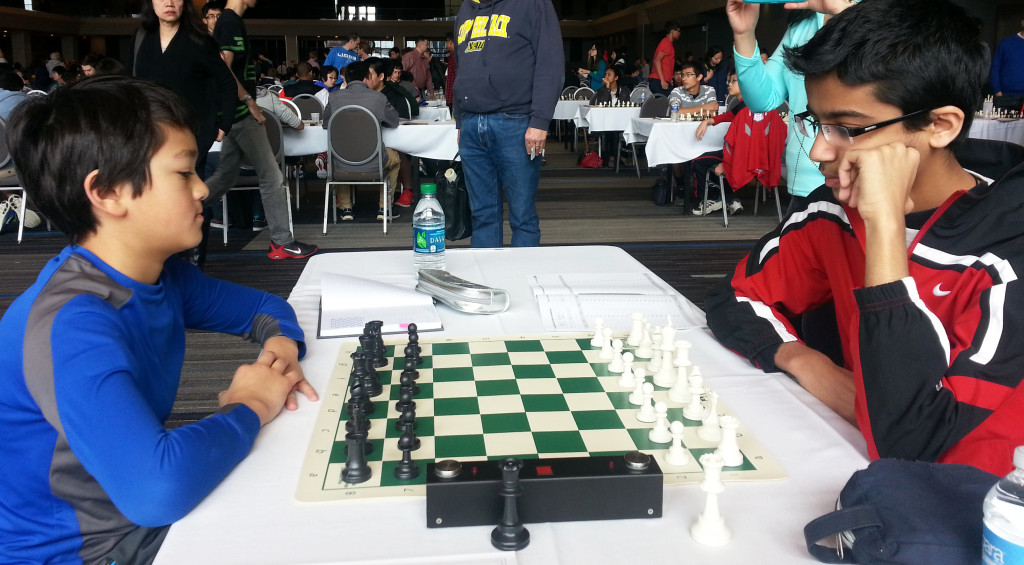 In Round 2, I overcame Taylor Bagley from Kentucky. This was another sub-par game from my side, as I was worse out of the opening, before outplaying him. The outplaying led to a winning opportunity which I missed, leading to what began to look like a drawish game with precise play. Fortunately, Taylor missed the optimal defense, and I was able to get the win. I was disgusted with the way I had been playing, as this is not the level of chess I expected of myself.

I was determined to play better the next day, and managed to do just that, winning a nice positional game against Abhishek Obili from Texas.

In Round 4, I beat Ben Li, a 7th grader from Minnesota. This was another strong game from my side, as I completely outplayed my opponent and dominated the game.

In Round 5, I faced the talented and a regular National player, FM Cameron Wheeler, from California. This was an awful game from my side, as I missed two strong continuations which would given me a substantial advantage, and was just worse after that. Cameron had an advantage when we decided to draw.

Heading into the final day, there was only 1 person on a perfect 5 / 5 – IM Kesav Viswanadha. Then there were quite a few players, including myself, trailing him at 4.5 / 5. I figured that a winning score would be 6.5, considering the strength of the tournament.  It was important for me to play strongest in the final two rounds.

In Round 6, I faced Michael Chen from Michigan. It was clear that my opponent was playing for a draw from the start, and even though I had a slight advantage, it was looking difficult to win. But slowly I began to outplay him, and eventually we reached a Rook endgame where I was a pawn up. But the problem was that I had only 30 seconds, while my opponent had around 30 minutes! However, I managed to stay calm and methodically advanced my Kingside majority to victory. I even checkmated my opponent, who strangely didn’t resign even after I had made 2 Queens against his lone king.

After the penultimate round, there were 4 players on 5.5 / 6 – Kesav, Cameron, Kapil Chandran, and myself. I had the best tie-breaking going into the final round, which was nice to know but not conclusive. This was just like the situation I encountered while playing the K-9 SuperNationals in 2013 – and the similarities didn’t end here. I knew I had to Win the last game to make it decisive.

By the time the 6th round had concluded, about 30-minutes before the final round, my Dad told me that Arthur Shen had defeated Kesav on the top board. So I began to prepare for Arthur, a good friend of mine, as it was obvious I would play him. But when the pairings came out 10 minutes before the round, I saw that I was playing Kesav instead. I was bewildered, and couldn’t understand how I was playing Kesav. But then I saw that Kesav was also on 5.5, which meant he had drawn his game with Arthur not lost. Looks like my Dad was mistaken! I was flustered. This was not the first time my Dad had done such a mixup.  In my only previous National Championship appearance – the K-9 SuperNationals 2013 – before the final round he told me that Safal Bora had won against Cameron Wheeler in the penultimate round.  So while I checked out Safal’s game in the few minutes left for the last round, the pairings came out just moments before round-time.  In fact, Cameron had won against Safal, and he was going to play me in the final round of the K-9 SuperNational Championship. With no time to prepare, I just shook my head and went on to play Cameron. Inspite of this confusion two years ago, I was able to win the game and the K-9 SuperNational title. So my Dad seems to have made this inaccurate results information into a tradition, and I’m just happy there are no more Nationals to play anymore for him to jolt me. Just before I walked to the board, he told me to bail him out once again for the last time.  I wonder if it will indeed be the last time 🙂

So here I was experiencing a true deja vu situation in the final round of the National High School Championship. There was no time to prepare now for Kesav, and I had unnecessarily tired myself chasing a wrong opponent. Walking to the board, I decided to just play something I had never done before, to avoid any potential preparation from my opponent. I knew that the line I was going to play was harmless for Black, should he play accurately, but figured it would have a good surprise-effect. The game evolved into a highly sharp and complicated position, when Kesav suddenly made the decisive mistake.

It felt great to win, as Kesav was a tough opponent. The win put me on 6.5 / 7, and since the other two players had drawn, this meant that I was sole 1st! 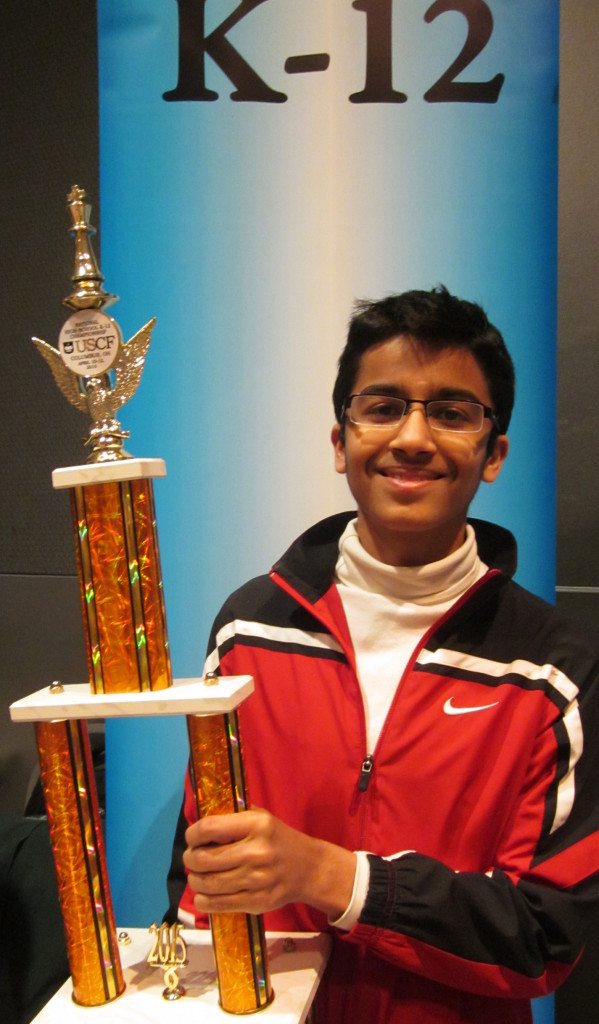 Overall, I was thrilled to have won the tournament, despite playing some poor chess in a few of the games, being unable to prepare for the opponents, as several of my opponents had no games in database, and being quite tired during some of the games as I was coming after playing a very intense 9-rounds at the Philadelphia Open. The competition here at the National High was extremely tough, and several players were underrated. So it was extremely satisfying to capture the title of the National High School Champion 2015.

This was my second national tournament, and like before I found the tournament well-organized. It’s quite hard to organize a tournament of this size so flawlessly and the USCF team needs to be commended.

Just like the last time at the K-9 SuperNationals, my father ended up purchasing the final-round Chess set. I still have the previous one and should probably consider using it some time 🙂 . 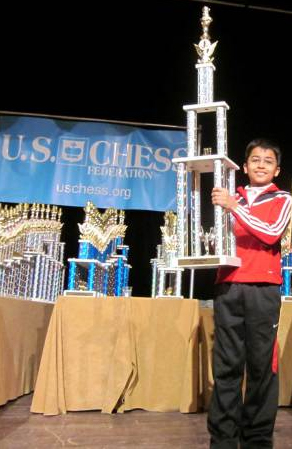 Or maybe I’ll be back next year 😉

(USCF coverage of the event can be seen here and here.) 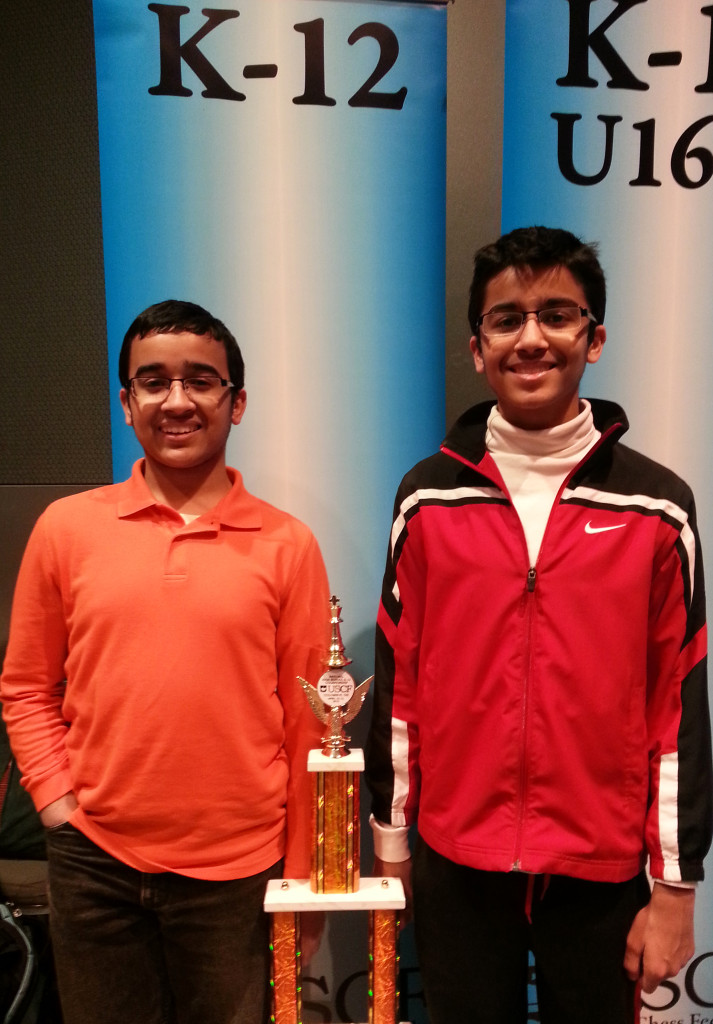 WIth my brother Aditya “Addy” Chandra, who helped me by troubling me less during the tournament 🙂 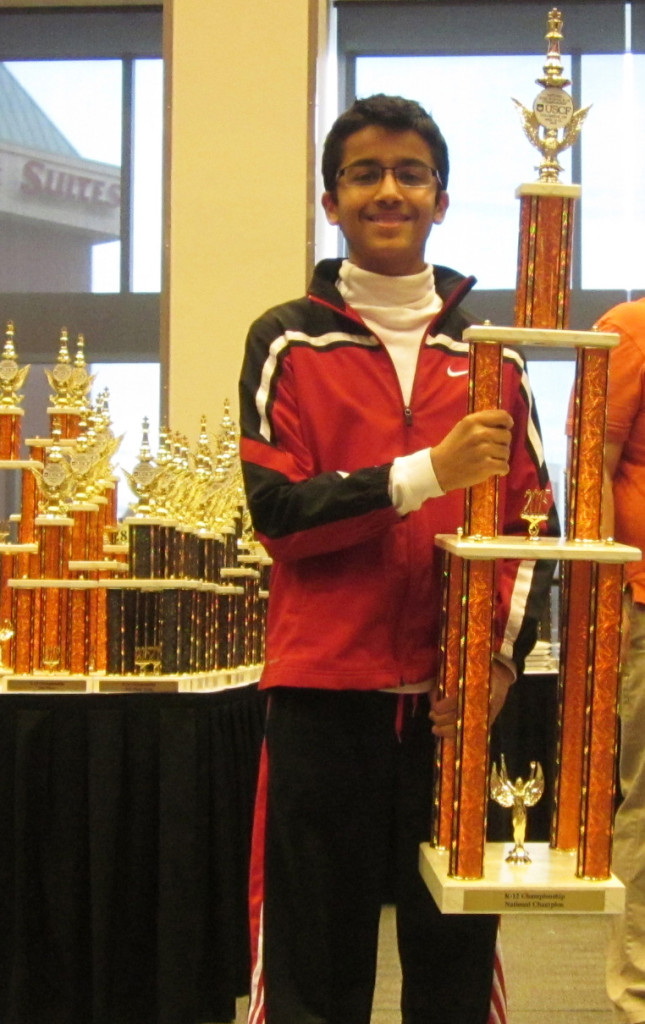