The first thing I want to say is that the Chess World lost a gem of a player and person in GM Vugar Gashimov, who passed away in January 2014.  Vugar, you’ll forever remain in our hearts.  His sudden passing brings to mind one of his quotes, “HAPPINESS – IS TO BE NEAR YOUR BELOVED ONES. MISFORTUNE – IS TO LOSE THESE PEOPLE.” 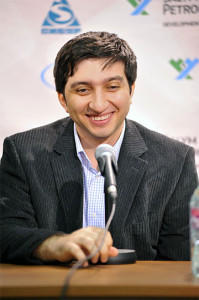 In memory and honor of this wonderful being, the Gashimov Memorial tournament was born, and held over a span of 10 days in Shamkir, Azerbajain, with the last round just finishing yesterday.  As expected, Carlsen won, adding yet another feather to his cap.  He’s got so many feathers now, that he can strut around like a peacock 😀 .  Can anyone remember the last time Carlsen DIDN’T win a major high-level tournament?  That’s pure dominance right there.

The Drawing of the Lots took place on the 19th, with .. you guessed it, Carlsen “winning” the 1st lot (Heck, this guy comes 1st even in the Drawing of Lots as well 🙂 ), granting him a double-white for the first 2 rounds.  This made things a lot easier for his first two opponents, since they now knew the best start they could hope for was 1/2 🙂

Carlsen raced out to a 2/2 start, maximizing his double-white benefit, beating Mamedyarov and Nakamura in the process.  It seems like his games with Nakamura have become a bit of a grudge match, as the two players have engaged in a little verbal jousting (My fellow Pink Panther fans, you know what I mean by this:) ) with each other.  Talk is Talk.  But Carlsen Walks the Walk, since his score against Nakamura is now 10-0 in classical games (not counting Draws).  Advantange: Carlsen 😀 .  Below is an annotation I did of Magnus’ first round game, a striking win against Mamedyarov:

Carlsen’s 2nd round game against Nakamura saw a position similar to that of Carlsen – Kamsky, Sinquefield Cup 2013, in which after some maneuvering of the pieces, Carlsen was able to trade into a slightly better endgame which he converted.  No suprise there 🙂

Things were looking great for him at this stage.  After an exciting draw against Karjakin, which was an “Almost-won, Almost-Lost” for both players, Carlsen faced Caruana with Black once again.  It started out as a Berlin, which of course bored everyone to death 🙂 .  But things began to pick up on the 20th move.  Caruana was enjoying a nice space advantage, and some inaccuracies from Carlsen further added to Caruana’s bonus.  A tactical error by Magnus on the 24th move, sealed the deal, and from there on Caruana slowly but surely converted his material and positional advantage.

This must have been a hard blow for Carlsen.  After playing great chess for 3 rounds, he lost in a rather one-sided battle.  But no matter, he had the White pieces now, and was Angry. His 5th round against Radjabov started out as a Kings Indian, with Carlsen choosing a line rarely seen at the top level.  Radjabov lashed out with 19.f5, a typical Kings Indian move, undeterred by the fact that his King was somewhat exposed on h7.  An erroneous capture in the center with 22.Nxe4 by Magnus, saw him lose an exchange by force.  He definitely had some compensation, but Radjabov was able to induce some weaknesses, after which Carlsen’s positional crumbled and he was forced to resign.  Yes, Resign!

My God, what was this ! Two losses in a row from Magnus ?!  The last time he lost twice in a row was in 2010 – 4 years ago, and the year I started chess as a FIDE rated player!  To put it in comparison, the last time I lost two in a row was 6 1/2 months ago.  That’s not so bad on its own, but when you look at the last time Magnus lost 2 in a  row … 🙂 .  I could relate what Magnus was going through.  So sent him a tweet with my tips on what to do after tough losses I did.  Yoda aside, it’s clear that he read it since he unleashed the Kraken, rampaging through the field in the 2nd half to score 4/5 , coming 1st by a clear point with 6.5/9.  Here’s his final round win against Caruana:

So what was it that led to such a spectacular turn around ?

Mental Strength and Determination.  Magnus writes “The rest day with the exciting football cup was just what I needed.  Our team of international players, with help from two Azeri players in the final, won on penalty shoot out.  I’m feeling more energetic, and although my play isn’t perfect, the results have been terrific after the rest day.”  So for him, it was watching his favorite soccer team that relaxed him and helped him to forget the agony of the previous 2 rounds.  Whatever your thing is that helps you relax and put aside painful losses, it’s important to do that immediately.  It builds Mental Strength, and the Will to keep fighting.  That’s what makes a Champion!