It’s January 14, 2010.  The weather is a bitter 37 degrees Fahrenheit (3 Celsius) , with frosty winds gnawing at my face.  Wearing my Choppers beanie, I enter the venue of my first GM Open tournament as a rated player.  The 2010 edition of the annual Delhi GM Open (Parsvnath) tournament held in New Delhi, India.  It was one of the strongest tournaments in the country.  I was 10-years old and had shown up at the venue with my newly minted FIDE rating of 1548.  There was a huge crowd in-front of the bulletin board with the Starting List.  My father accompanied me to scour the tournament sheets to confirm my name and starting rank.  As my father started going down the list, I suggested it might be faster if he started from the bottom of the list and went up.  I was right.  We found my name at # 265 out of 378 players.  A looong way to go I thought!  On the next set of sheets, I found my pairing.

I was paired with International Master (IM) Boris Arkhangelsky from Russia, who was rated 2291 (FIDE) at the time.  An adrenaline rush passed through me.  Here I was with the chance to play an IM, a god-like status for me at the time.  An auspicious beginning to my chess journey, I thought.  I found my table in the cavernous auditorium, carefully laid my 2 cushions down, one on the seat to gain elevation and one at the back to keep me from sinking back, and took my seat at table #71. Jittery with excitement and anxiety, I fill out my notation sheet.  A few minutes later, Boris took his seat across the table and began filling out his sheet.  When he finished, I offered him a handshake, smiling awkwardly, in total awe. 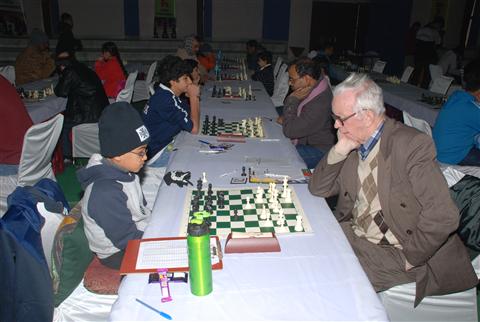 The game begins and Boris plays 1.c4, the English Opening.  My mind began racing with so many thoughts like cars on a 6-lane highway – “Why didn’t he do 1.e4, I had a clever idea for him in mind!  He’s avoiding 1.e4!  How does he know, that I don’t know how to play against c4! Hey, that’s the move the GM did against me in a simul recently.  Did Boris consult with the GM on how to beat me! After calming down , and remembering that he doesn’t need a GM to beat a stinkin’ 1548 🙂 , I responded, as I did with the GM in the simul, by playing 1.e6.  Boris employed an unusual setup.  Something different from what the GM did, a huge relief, reassuring me that they hadn’t consulted 🙂  As the game teeters on, it arrives at a point where my heart begins to pound vociferously.  It reminded me of the animation character Jerry when he stands in a corner his heart pounding out, after a chase by Tom.  Hope creeps into me, as I realize that I was about to win Boris’ weak pawn on d5.  This is it I thought.  I was now in a position to beat the IM.  I spent the next 5 minutes on a spree of gleeful fantasies of what it would mean should I win.  I could see history being written with my name in bold.

Thump!!  The sound of Boris thumping the clock brought me back from FantasyLand, and reverted my focus to the board.  Stop thinking about the rewards, I told myself.  Just think about how you can beat this guy. Just find a way. I decided it was safe to take another pawn, and played 33.Bxb3.  I was now two pawns up, but was significantly behind on the clock.  I only had 4 minutes left to Boris’ 29 minutes.  There was a 30 second increment after each move, but that doesn’t help too much in the situation I was encountering.  After a few simplifications, I emerged with two connected passed pawns!  We call this “Paradise” in English 🙂 .  I rolled them down the board, expecting to Win any moment.  Each square forward increasing the drumbeat in my head to a crescendo.  That’s when “THE WORD” came on the 47th move. “Edemee,” Boris said politely, before he pressed his clock.

I looked at him funny, wondering what the heck did “Edemee” mean.  Was it a decoy to mess with my mind and get me further into time trouble.  Maybe it was some top secret Russian code word.  I disregarded it, and went from quizzically looking at his face to the Board, and continued with 47.b2.  My pawn was just one square away from Queening, and the win appeared inevitable.  But, let’s not forget that I’m an inexperienced 1548 who swims in illusions of grandeur during his games 🙂 .  Boris decided to sacrifice a piece to stop the two pawns, the best practical try.  Once again he says “Edemee,” after which I came to the conclusion that he was off his rocket 🙂 .

I was now a piece up, but had to be careful of his outside passed Pawn.  Today, I would win that position with ease.  But at that time, winning the position was like undertaking Atlas’ duty of bearing the weight of the sky. It seemed almost impossible.  My eyes narrowed and darted across the board, scouring every inch to make sure that I deny him the slightest counterplay.  I took his Pawn on h6, after which he played Kg2.  Two moves later, he played 55.Qa3.  The position is still easily winning for me, if I was to play 55.Bf8.  But psychologically the Qa3 move unraveled me.  With my time into seconds now, I decided that it would be respectful to take a Draw against the veteran IM, instead of pushing-on, and I offered a Draw.  Boris looked up and said “Edemee!”  So that’s what that “Edemee” was all about, I thought.  Boris had been offering a Draw to me earlier, I figured.

I nodded my head, and Boris gladly accepted my Draw offer.  I had mixed feelings after the game.  One side of me was elated at Drawing against an IM.  But another side was disappointed that I was completely winning when I took a Draw.

When I made up my mind in 2009 that I wanted to be really good at the game, we got ourselves a professional coach in early Fall (Autumn) of 2009, instead of learning by playing around with unrated or low-rated players.  But that day, January 14, 2010, was the day which got the ball rolling for me and firmed up my quest.  The dice had been thrown, and I knew that day I wanted to become a GM.  There was a fiery passion that was born.  If I can handle a veteran IM in my first game, then I was good enough to dream of being a strong GM.  That process is still ongoing 🙂

The “Edemee” story didn’t end  there.  Let’s fast forward now, to May 20, 2012.  I’m playing the Salento Open, in Gallipoli on the southern tip of Italy.  My opponent is IM Mario Lanzani, and 12 moves into our game he says, “I offer you a Remi.”  Instantly, my mind raced back in time to the day I played Boris.  I then realized that Boris had been saying “Remi” not “Edemee!”  Although to me at that time, Remi (a French word) was just as strange a word as Edemee!  I smiled at the memory, which had set my chess journey in motion and entwined my fate with chess forever.