Hi,
My name is Tom Nordeman, I was born April 9, 1983, and I am the oldest of five children. When I was six months old I was diagnosed with Cerebral palsy. This means that the part of my brain responsible for muscle movement and coordination has been injured. When my parents found out I had Cerebral palsy they were devastated and afraid because they did not know a lot about this condition and were left with many questions. However, they also loved me with their whole hearts and were committed to finding ways to allow me to live my life to the fullest. They asked my uncle John to be my godfather.
Uncle John is a wonderful person. When I was a young boy, he and I would take many trips together. We would go to the zoo or downtown Philadelphia and sometimes to the New Jersey Shore. One of my favorite trips with Uncle John was to St. Charles Seminary. We would visit a friend of his Joe Watson (now Fr. Joe Watson) who at that time was studying to become a Catholic priest. Uncle John would later enter the seminary and become a priest himself. Both my parents and Uncle John were instrumental in my Catholic upbringing.
Some may wonder how I get through life. After all they say I face so many challenges and difficulties. This is true for sure, but there is one thing that helps me get from one day to the next. I strongly believe that is God. I also feel that nothing is impossible with God; therefore, I am always open to new possibilities. The Lord in fact has worked many great miracles in my life and showered me with many blessings.
Around 2000 I decided I was becoming a man and I wanted to move away from home. My parents were providing excellent care and support for me, but it was still difficult for me to have a social life like my parents and siblings had. My brothers and sisters played sports throughout middle school and high school; they played basketball, baseball and football. I was unable to participate so I felt left behind. It was around this time that I discovered Chess. Here was a sport in which I could fully participate. I no longer was just a passive spectator sitting on the side lines, but now I was an active participant. This was extremely exciting for me. Chess was my game. I actually did not start playing in tournaments until two years into my chess career.
When I moved from my parents suburban home in order to be more independent I, moved to a wheelchair community called Inglis House. Although Inglis House is classified as a nursing home, it is definitely not what one would think of when they think of a nursing home. For example, most people in nursing homes are senior citizens sixty five or older; however at Inglis many residents are younger than fifty five. Inglis also provides many recreational activities each day, for example there’s poker, art classes, Tae-Kwan-Doe, and occasionally has outings into the community. I have been to some interesting places with Inglis; there is an Amish restaurant called Plain & Fancy in Lancaster that I go to every year. They serve home-style lunches and everything is freshly made and natural; the Amish do not believe in using man made preservatives in their foods. Another interesting trip that I attended was the Herr’s potato factory in Nottingham. The people at Herr’s gave us a tour of the factory and showed us how they make their products. They also gave us freshly made straight from the conveyer belt potato chips.
It was when I moved to Inglis house at age twenty that my Chess career accelerated. I began playing at local clubs and tournaments. There are two reasons I enjoy playing Chess. First, it presents me with a challenge and an opportunity to learn something new. In chess the same game is never played twice. Players are constantly trying to come up with new ideas to outwit their opponents. The second aspect of Chess that I thoroughly enjoy is the socialization. When I attend tournaments I have the chance to meet new people. I am often inspired by the youth who not only are strong Chess players, but they also treat me with infinite kindness and compassion. One young person I would like to highlight is Akshat.
I first met Akshat last spring at the Philadelphia Open. I went to my board to play the last round and he was sitting next to me preparing for his game. I really wanted to talk to him but at the same time I did not want to break his concentration. After a few minutes I decided I would take a chance. I said “Excuse me I do not want to bother you but may I ask you a question”. He replied, “You are not bothering me,” and he allowed me to talk with him. Akshat’s compassion touched my heart, and from that time on I knew I had a very special friend. The littlest things make the biggest difference.

When I am not playing chess I enjoy academic studies. I also speak to young people about my faith in God. Two years ago I obtained my associate’s degree in general studies from community college of Philadelphia. I hope to one day complete my Bachelors and go on to become a youth counselor.
I would like to thank Akshat for giving me the opportunity to tell my story. Sometimes it feels like when I go to chess tournaments I meet a chess player. However there is no time for me to talk with my opponents and see what really makes them who they are. Don’t get me wrong, I enjoy meeting chess players very much, but it is as if they are wearing an invisible mask. Hopefully through this writing my chess mask has come off and people can see who I really am.
Tom Nordeman 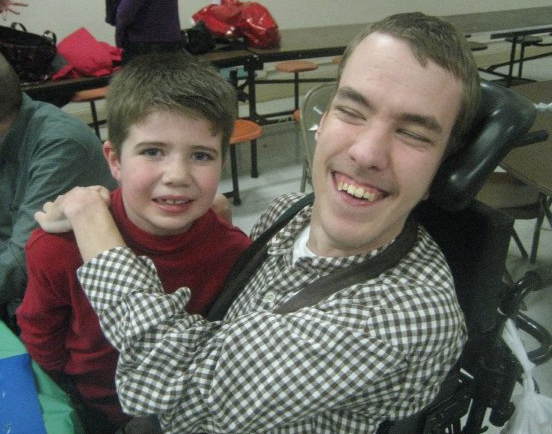 Tom with his godson, David

6 thoughts on “Tom In his Own Words”