The US Junior Closed Chess Championship is one of the most prestigious tournaments in the United States – next only to the US Championships. This was my first time playing the US Junior, and I was looking forward to competing in this event. The chief attraction of the invitational Junior Championship is that the winner qualifies for the following year’s US Championship, in which they get to play top world-class players in a typical round-robin format, just like other elite tournaments. With next year’s edition potentially having a lineup that could include Hikaru Nakamura, Fabiano Caruana, Wesley So and Gata Kamsky, each participant in the Junior championship had sufficient motivation to go all out.
The players arrived in St. Louis on July 6, one day before the event was to begin, and we all drew our pairing lots during the opening ceremony that evening. The picking of the lots was done by last name, but in reverse alphabetical order. By the time I got around to picking, all the 5 White lots had already been selected, and I had to content myself with the 4 Whites draw. The strongest US Junior ever had begun. 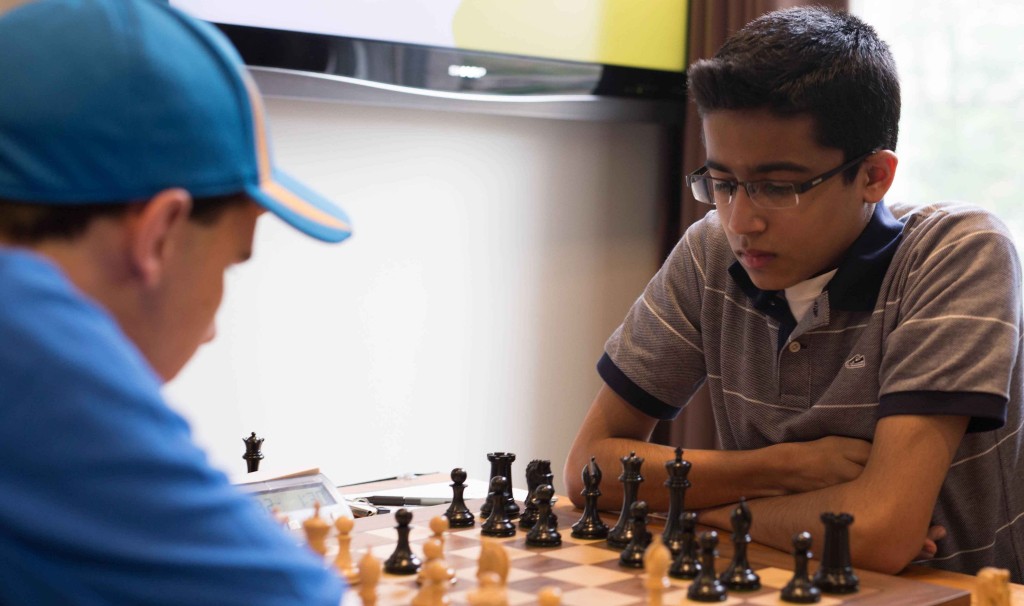 In Round 1, I had the Black pieces and faced a good friend of mine, the precocious International Master Luke Harmon Vellotti. This was a tough game to start off the tournament. Although one may have been tempted to play a solid opening, especially with the Black pieces, I decided to go for a more fighting and complex game by revisiting an old friend. 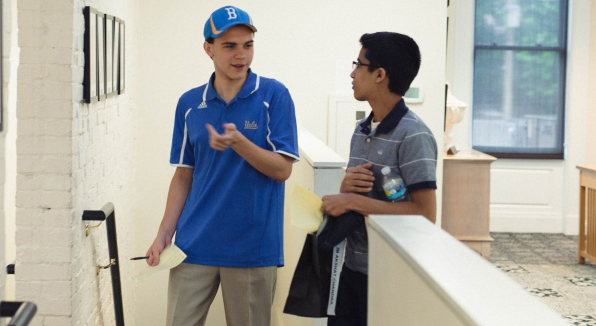 Akshat Chandra and Luke Vellotti after Round 1

It felt great to start the tournament off with a victory as Black against a strong opponent. I carried the momentum through the next 3 rounds and raced out to 3.5/4. In Round 5, I faced FM Ruifeng Li, as Black. 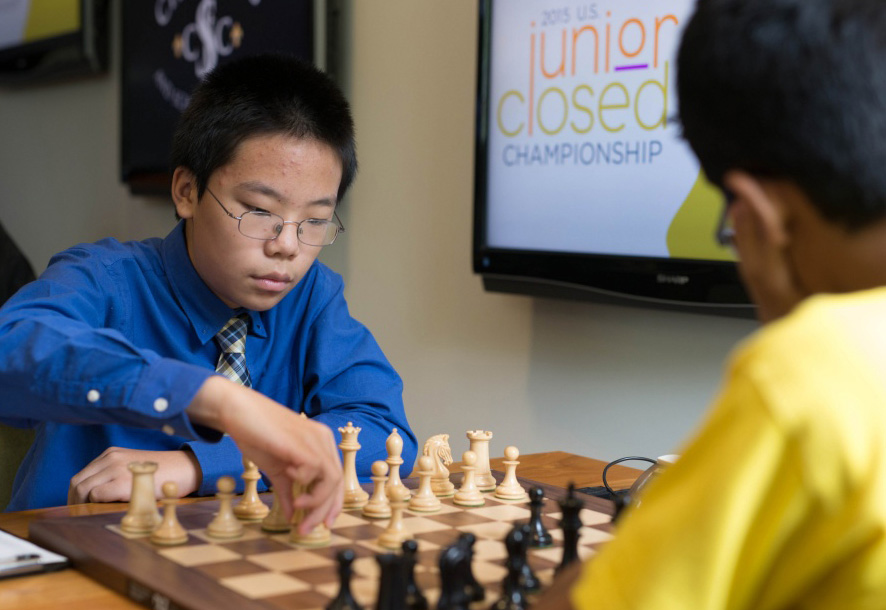 The game started off horribly, as I got trapped in my opponent’s preparation, like an insect trapped in tree sap. Ruifeng was incredibly well prepared, and was blitzing out his moves. He literally got a near-decisive advantage with his preparation. Meanwhile, I was sweating it out and had already fallen way behind on the clock. Under enormous pressure, I ended up making a horrible blunder, which I realized as soon as I had moved. I saw the winning continuation for Ruifeng, and thought I was going to lose any moment. The only consolation was that Ruifeng was out of his preparation. It was here that the tide of the game started to turn. Ruifeng missed the killer blow, and I started to outplay him despite being an exchange down. His advantage dissipated after inaccurate moves from his side, and I found myself holding the advantage now. However, I was so relieved of not being in any danger of losing that I decided to simplify matters and force a draw. 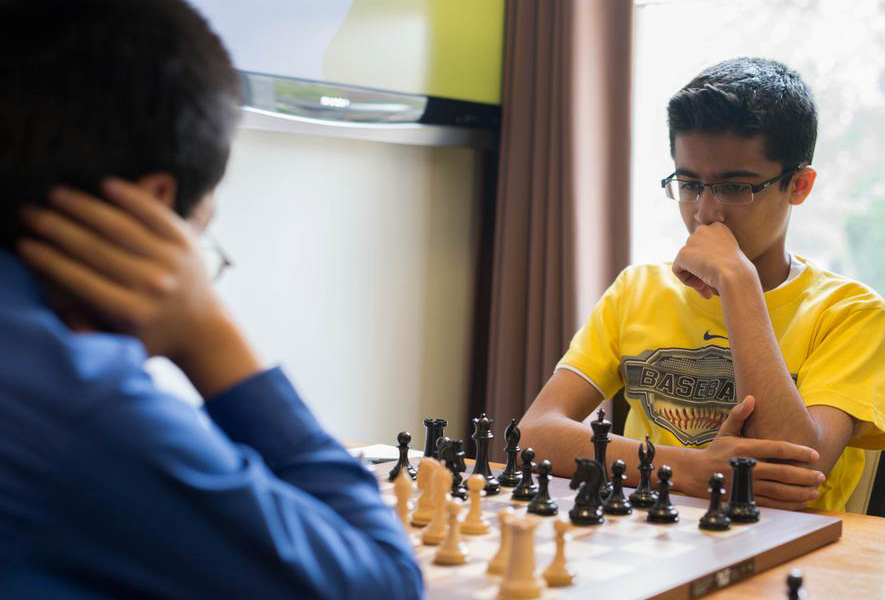 Here is the game, annotated by tournament analyst Mackenzie Molner: 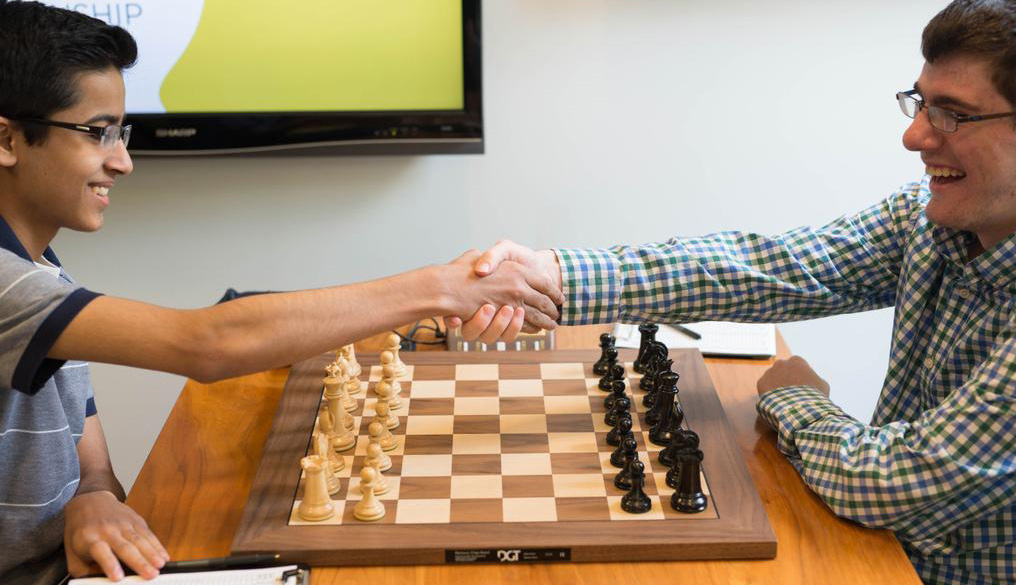 After a bloodless draw in R6 against IM Michael Bodek, I faced GM Jeffery Xiong, with the Black pieces. This was easily the most anticipated match of the tournament, with the two top seeds facing off in the crucial 7th round. I had a ½ point lead over Jeffery at this stage, and so it was essential to hold my ground and not lose my grip on the tournament standings. 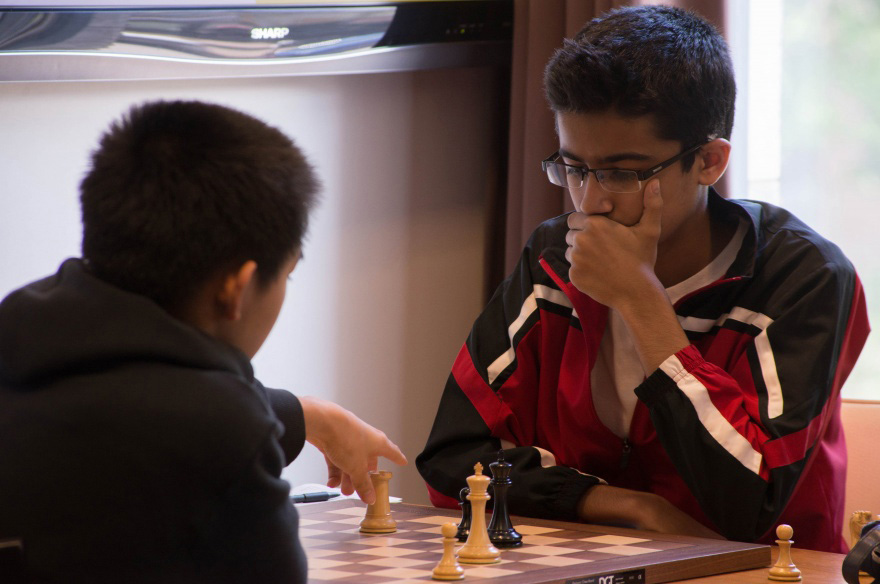 I decided to roll with the Taimanov once again. Things were fairly balanced, and we soon traded Queens into a minor piece endgame with rooks on the board. The position was completely even, but I had fallen into serious time trouble. I had about 2 minutes to complete the last 12 moves and as a result, I made some serious mistakes. When we reached the time control, Jeffery had a near-decisive advantage. I defended tenaciously for the next few moves, while Jeffery kept playing accurately to hold his advantage. But suddenly, Jeffery made a blunder, overlooking a fantastic resource of mine. This allowed me to simplify into an easily drawn 2 vs 1 Rook endgame, and the game was eventually drawn.

In R8, I faced FM Arthur Shen with the White pieces. While I had drawn my last three games, Arthur had reeled off four straight wins to join me in the lead with 5/7. It was only fitting that we played in the penultimate round.

Arthur surprised me in the opening by offering me to go into the main line Ruy Lopez, something he has never played before. After some thought, I decided to decline by going for 6.d3 instead. I managed to win a pawn after an inaccuracy by him, and though he had compensation, Arthur was unable to find the best continuation. I was able to consolidate, and show good technique to close out the game effectively. 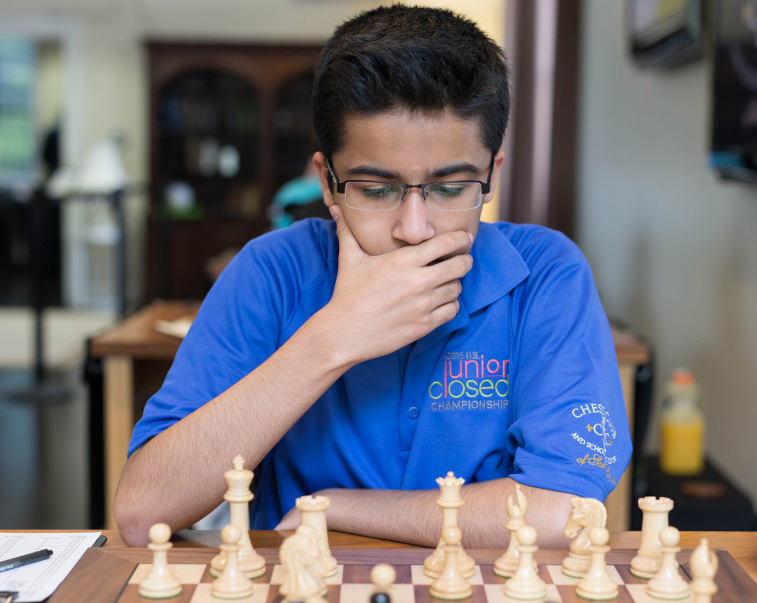 Akshat Chandra in game against Arthur Shen in R8

Going into the last round, I was the sole leader at 6/9, with Jeffery following close behind at 5.5/9. It was reassuring to know that things were in my hands, and I had control of the tournament’s outcome. I faced FM Awonder Liang with the Black pieces. 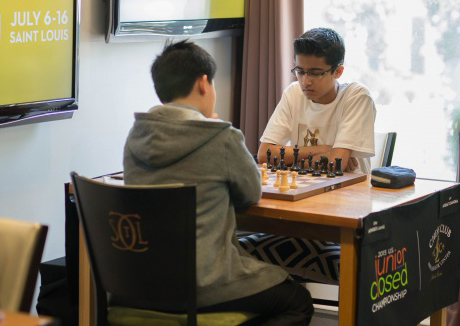 I stuck to my Taimanov once again, and Awonder surprised me in the opening by going for a variation he had never played before. I responded in the most solid manner, but Awonder was still in his preparation, and continued playing swiftly. This was quite uncomfortable, and I decided to throw him out of his preparation by developing my bishop to d7, instead of the natural looking 14…exf4. This seemed to do the trick as Awonder began to think now. He was able to gain an impressive-looking center, but it turned out to be rather flimsy. I enhanced the pressure and Awonder cracked, allowing me to build up a decisive advantage. The game went on for a few more moves, before White resigned.

I was thrilled to have won the 2015 US Junior Championship, and earn a spot into the 2016 US Championships. It is exciting to know that I could be playing the likes of Caruana and Nakamura next year! 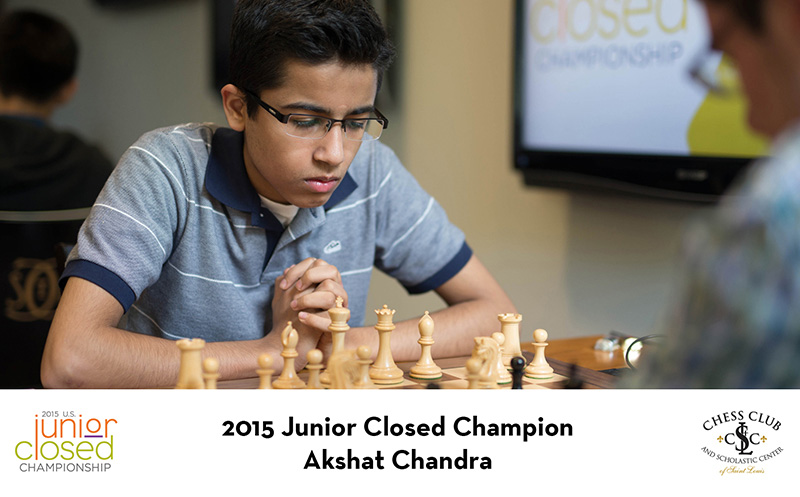 It takes a great team to organize such a major tournament flawlessly. Arbiters Tony Rich and Mike Kummer did a great job officiating the event, and the production staff did an impeccable job of broadcasting the games and commentary online. In many ways, the organization of the US Junior was like a dry-run for the Sinquefield Cup which begins in August. Judging by the way they managed the US Junior, the team is definitely more than ready to host the world’s elite once more. 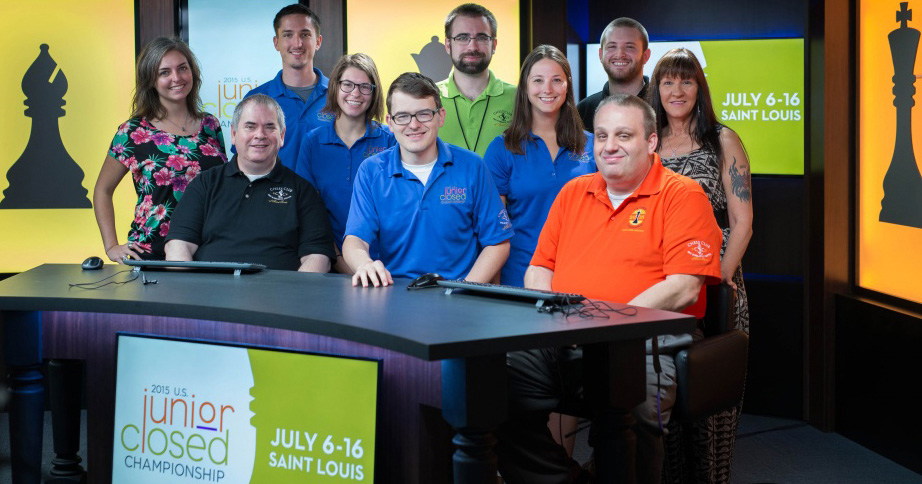 Finally, I’d like to thank Rex and Jeanne Sinquefield for providing juniors an opportunity to compete in an elite environment and conditions. Without their support and vision, the level of chess interest in America would not be where it is today. 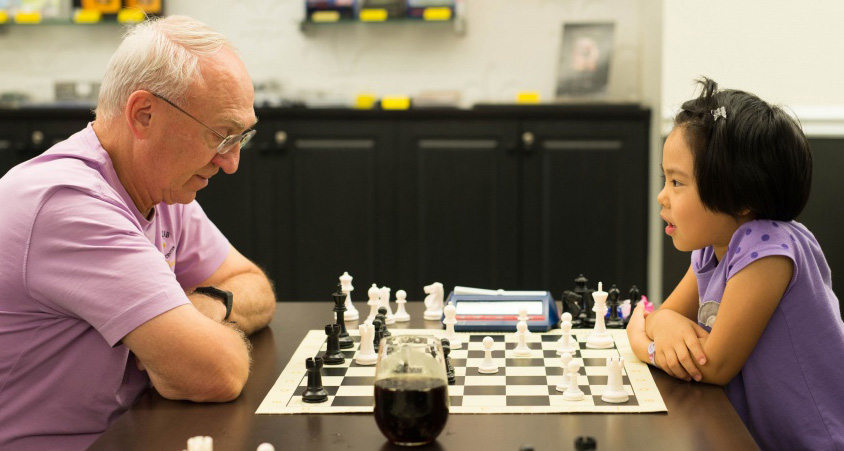 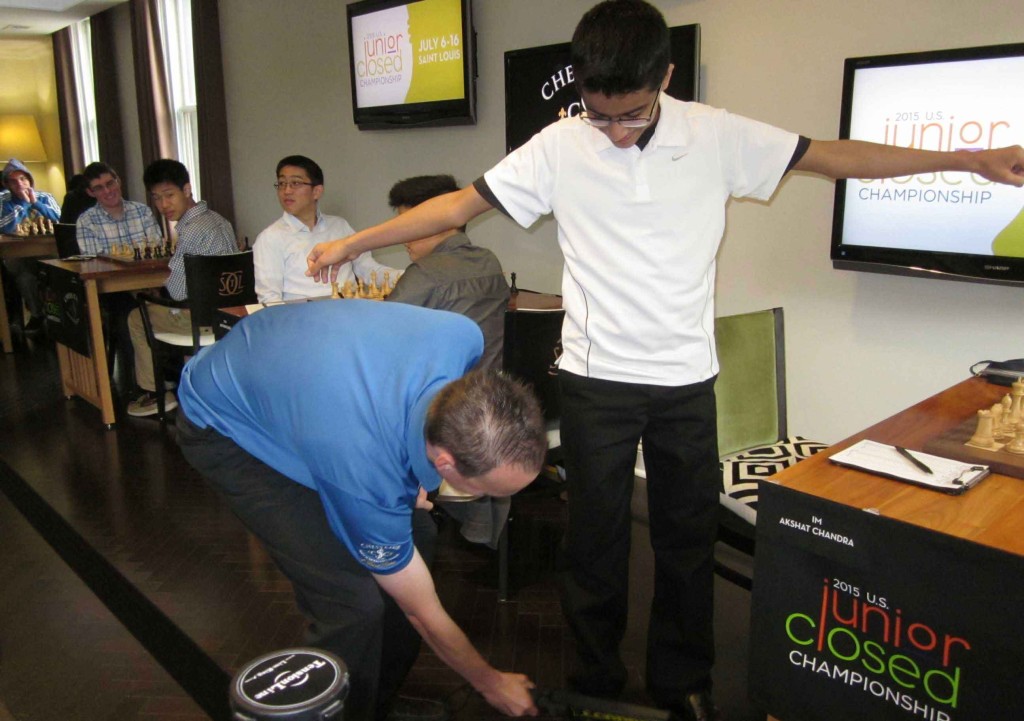 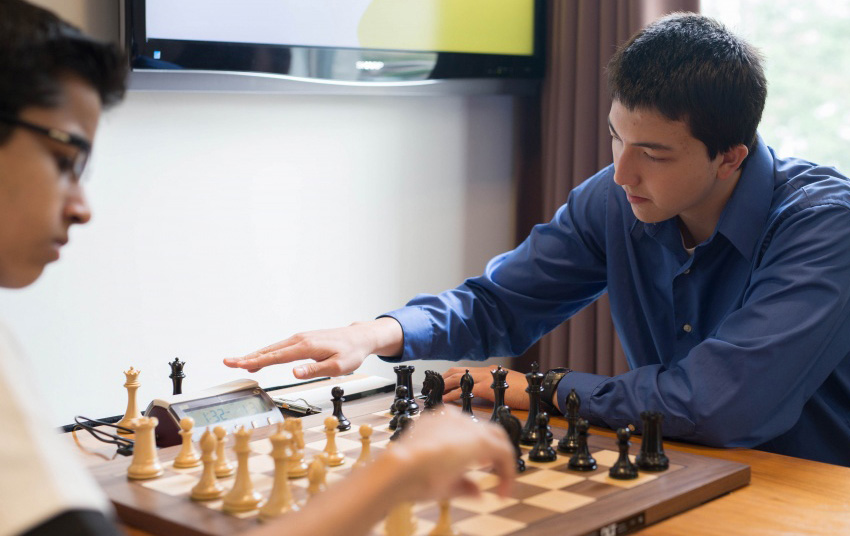 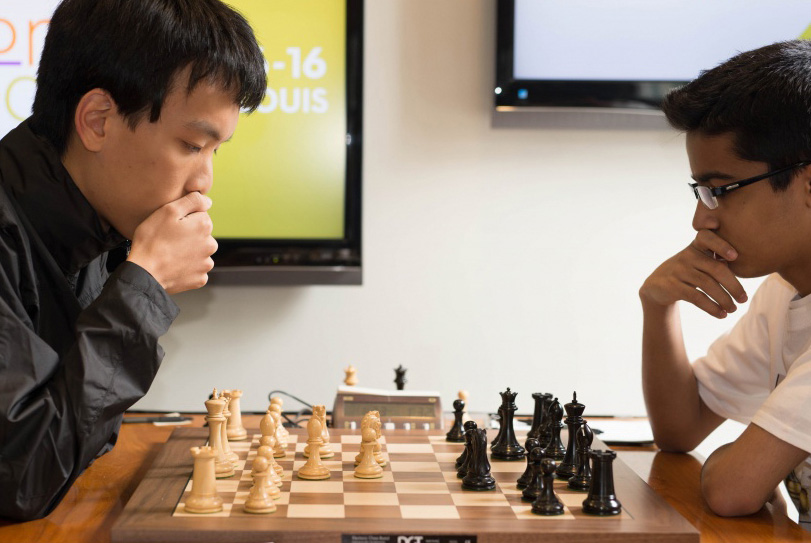 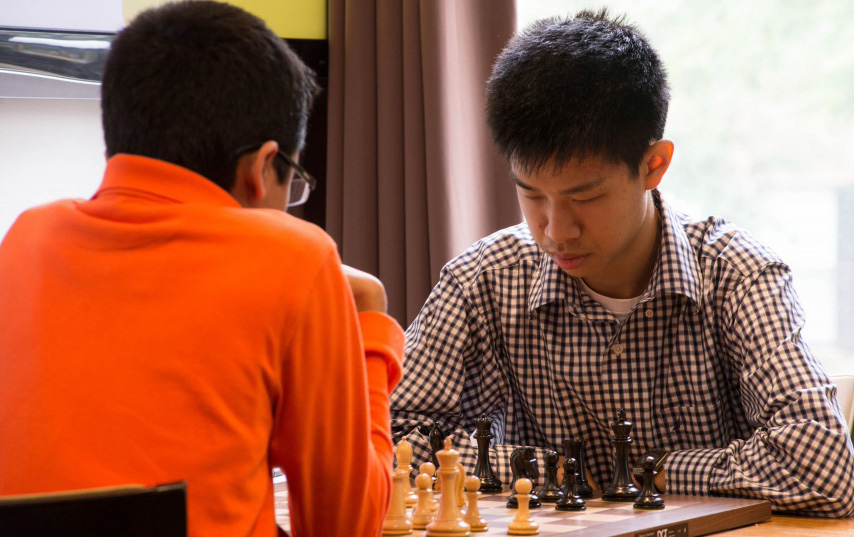 4 thoughts on “The US Junior Championship 2015
Winning the strongest US Junior event ever in my first appearance!”